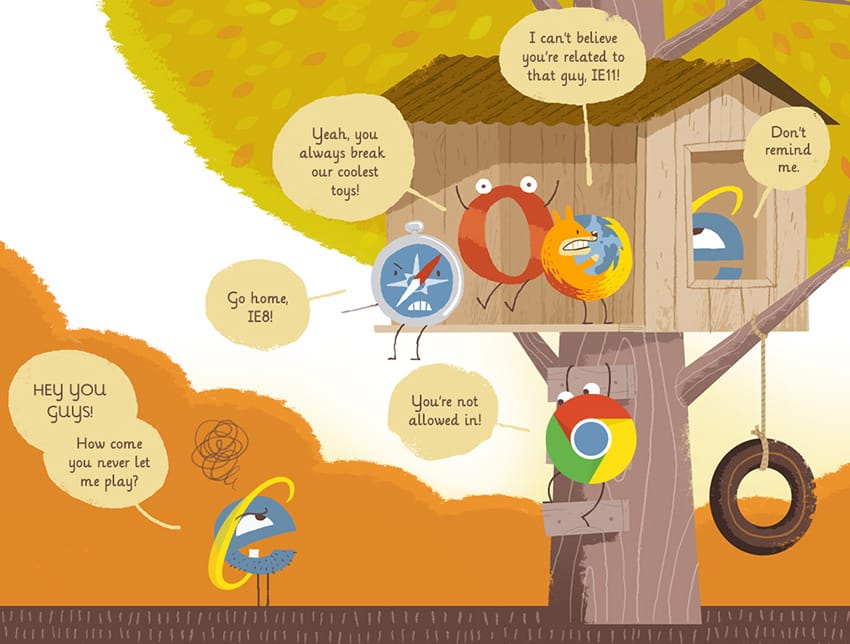 I remember coming up as a developer back in 2005, Internet Explorer 6 & 7 still had a huge Market Share in the browser world. Mozilla Firefox was still fairly new at the time and quickly became the browser of choice by developers, and by late 2008 it had almost overtaken Internet Explorer as the most used browser. I remember pawning Firefox off onto all of my friends and family members and telling them about the “security loopholes” in Internet Explorer, and that they should use Firefox because it was a much more stable browser… all for my own selfish reasons. I didn’t want to have to code websites for the older versions of Internet Explorer anymore.

I used to have nightmares about coding. The struggle was real. I would toss and turn at night with the thought of returning to work the next day and having to figure out “how am I going to make this work?”. My fellow co-workers and I would sit around and brainstorm ideas on how to “hack” a project just to get it to look like it does on the other “more modern” browsers that were available to us at the time. We’d spend countless hours on every project making up separate CSS Stylesheets just to handle the different versions of Internet Explorer. Also, this was a huge dilemma for employers because it was never known how much additional time would be spent on a project as it would inevitably cause issue with deadlines and budget.

At the same time time, Google Chrome was first introduced to the market so our workload for cross-browser-compatibility grew in size. But this is when the shift in browser usage began to take place. More and more people were using computers for daily life functions and the rise of MySpace as the first “Social Media” platform being the driving force behind the younger demographic wanting to be able to customize everything about their browsing experience, using other browsers other than Internet Explorer was a “no brainer”. By 2009, Mozilla Firefox usage had overtaken the spotlight as the most widely used browser in America by almost 10%, and web developers were starting to see the light! Firefox was now leading the charge of what real web standards could potentially look like and now everyone else was playing catch-up, although Google Chrome was just up-and-coming and was silently gaining momentum.

By the end of 2010, Google Chrome had climbed to 22.4% of the Market Share from 9.8%, more than doubling in usage because it gave users an alternative to both Internet Explorer and Mozilla Firefox. Touted as the “fastest” browser on the market, more and more people began to take notice of this new browser. Google made it very easy for people to find it too considering it was the largest Search Engine and most widely used, they would suggest downloading it right on their search page making it more accessible. During this time, developers started mocking Internet Explorer and decided it was time to stop supporting older versions of the one-time popular browser. Developers around the world started making websites dedicated to killing off Internet Explorer 6 and went as far as having a mock funeral for it. Once the news broke, Microsoft’s’ PR Dept. started scrambling to do damage control and held a press conference to defend the out-dated browser. It was a pretty wild, yet awesome thing to witness.

Fast forward to 2013, Google Chrome now has a greater Market Share than all Internet Explorer Versions and Mozilla Firefox combined! With the corporate giant at the forefront, they have now been putting the heat on Microsoft by dropping support of their older IE versions such as Internet Explorer 9, which has only been around since 2011 and was boasted as Microsoft’s flagship browser because it supports HTML5 audio, video, canvas, CSS3, and SVG. In a recent article posted on Google’s own Blogspot:

[blockquote author=”Alex Chitu” pull=””]We support the latest version of Google Chrome (which automatically updates whenever it detects that a new version of the browser is available) as well as the current and prior major release of Firefox, Internet Explorer and Safari on a rolling basis. Each time a new version of one of these browsers is released, we begin supporting the update and stop supporting the third-oldest version.[/blockquote]

We have decided to adopt the same model and start by dropping support for Internet Explorer 8 by January 1st of 2014. Don’t worry though, your website will still work for you and those who still use the browser, it’s just some of the additional visual effects and functionality will go unnoticed for those who still use it. There is cool stuff happening in the web world right now and Internet Explorer has been keeping us from it. Our developers have been very anxious to start using these newer technologies to give users a more engaging web experience.

By Q3 of 2014, we are also looking to drop support for Internet Explorer 9, but we want to let our client base catch up a little first. We encourage everyone to upgrade their browsers so you may gain the full potential of your own web applications as well! Look for good things to come from AudiologyDesign in 2014, I know I am pretty excited about it!

We are a digital marketing agency specializing in the hearing healthcare industry. Grow patient leads.